How to Prime a Cummins Fuel System

If you ever lose your fuel prime, here is the procedure to re-prime the fuel pump on a Cummins engine:
NOTE: The ISB and B5.9 prime procedures are different.

For the ISB Engine:
Turn key on and just "bump" the starter. Leave key in run position for 30 seconds. Turn off and let sit for about ten seconds.

Do this three more times: key to start for just an instant, then leave on run for 30 seconds, then off for ten seconds.

It is VERY IMPORTANT that you follow this procedure EXACTLY and USE A STOPWATCH, as timing is CRITICAL!

For the B5.9 engine, the procedure is different because this engine does not have an electronic fuel pump. The following is from Lew Parsons of Cummins:
If you do have the older 230hp B-series, there is only one way to clear air from the fuel pump and injector lines. You have to loosen the fitting (where they enter the head) on the injector lines and crank the engine with the starter and literally pump the air out of the injector lines. This is not an easy, or very clean thing to do. And it is a (2) person job.

As you can imagine the fuel is under pressure and can spray for quite some distance, (all over the bedroom) so you have to keep a rag over the fitting while the other person is cranking the engine. The idea is to "crack" or just loosen the injector fitting and allow the fuel pump to push the air bubble out, then tighten the fitting again and move on to the next injector line. The B-series is a (6) cylinder engine, and will have (6) injector lines, one for each cylinder.

In my experience, I have rarely had to bleed all (6) lines to get the engine to start. Most of the time, I'll bleed the air out of cylinder #1, #6 then #3 or #4, and the engine will start to "sputter" like it is trying fire while I'm bleeding the air out. When that happens, tighten the fitting up and let the engine start. This last part is very important!

Once the engine has started, push the accelerator pedal to the floor and hold it there for 30-60 seconds. Doing this allows the fuel pump to pull any remaining air pockets out of the filter and fuel lines without stalling the engine. If you let the engine idle, it will not have enough suction on the fuel lines to pull past a air bubble and will stall it out again.

That is probably why your engine stalled out in the first place after you drained the water out of your fuel filter.

Gene Hamelman also advises that it may be possible to just crank the engine for 30 seconds, let the starter cool, and crank again and again until the engine starts. Just be sure to let your starter cool sufficiently between successive starting attempts ( 2 minutes if I recall right??).

Jim Kangas called the 1-800-DIESELS number and got this info from Cummins:
There is a manual pump on the right side of the engine (230 HP) under the engine mounted fuel filter. Fill both fuel filters with fuel and then pump the button on the manual pump until it got hard (like an outboard motor fuel line bulb). It took 200 pumps using both hands to do it but the engine started right up. You don't have to do the pumping consecutively, you can take a break and not lose any ground. This is easiest to do laying on your back under the engine. It is not that difficult but tiring.

Here is an alternative method provided by Bud Himes:
First, raise the bed and engine cover and locate the banjo fitting an the engine-mounted fuel filter. Crack it loose about 3/4 turn. Make sure the new filter (or the old one if you lost the prime while draining water from the clear bowl on the bottom) is full of fuel. Next, remove the fuel cap and replace it with the tank pressurizer seen in the following photos. Click either picture for a larger view. 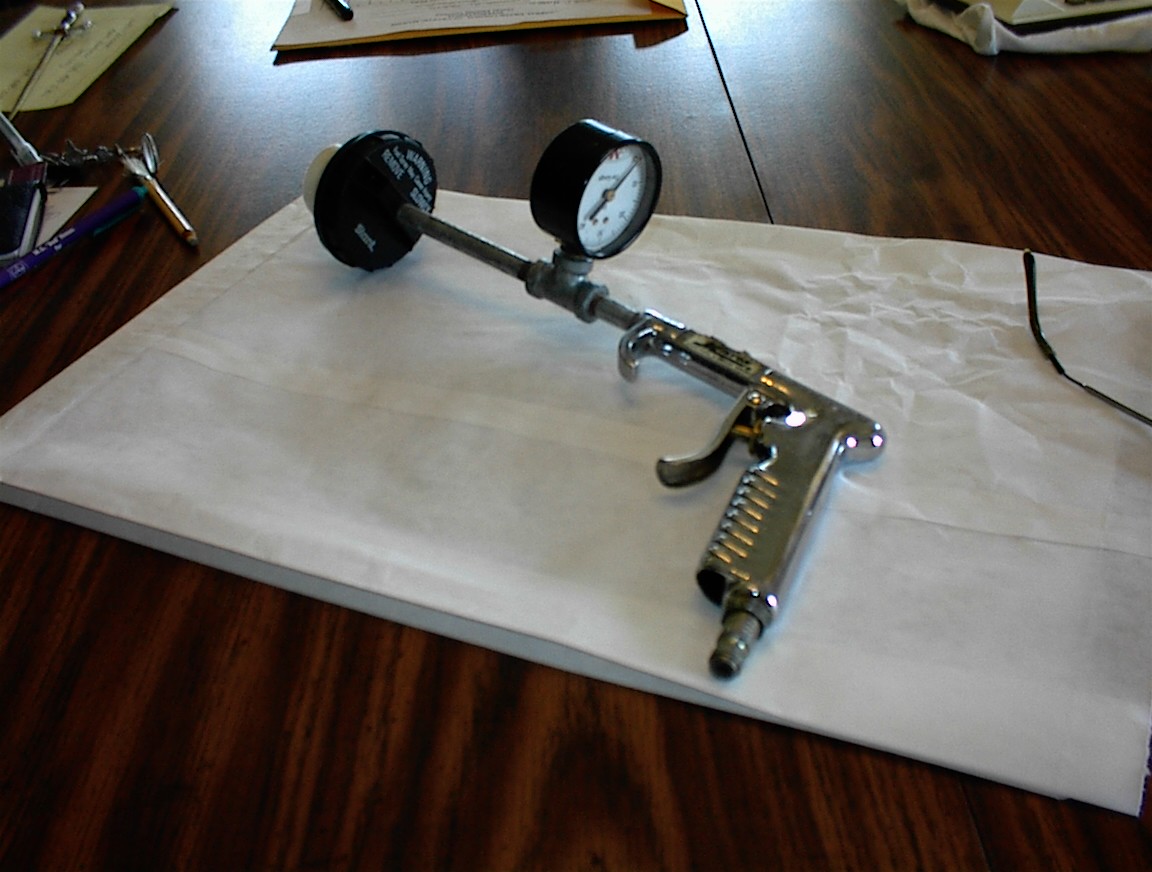 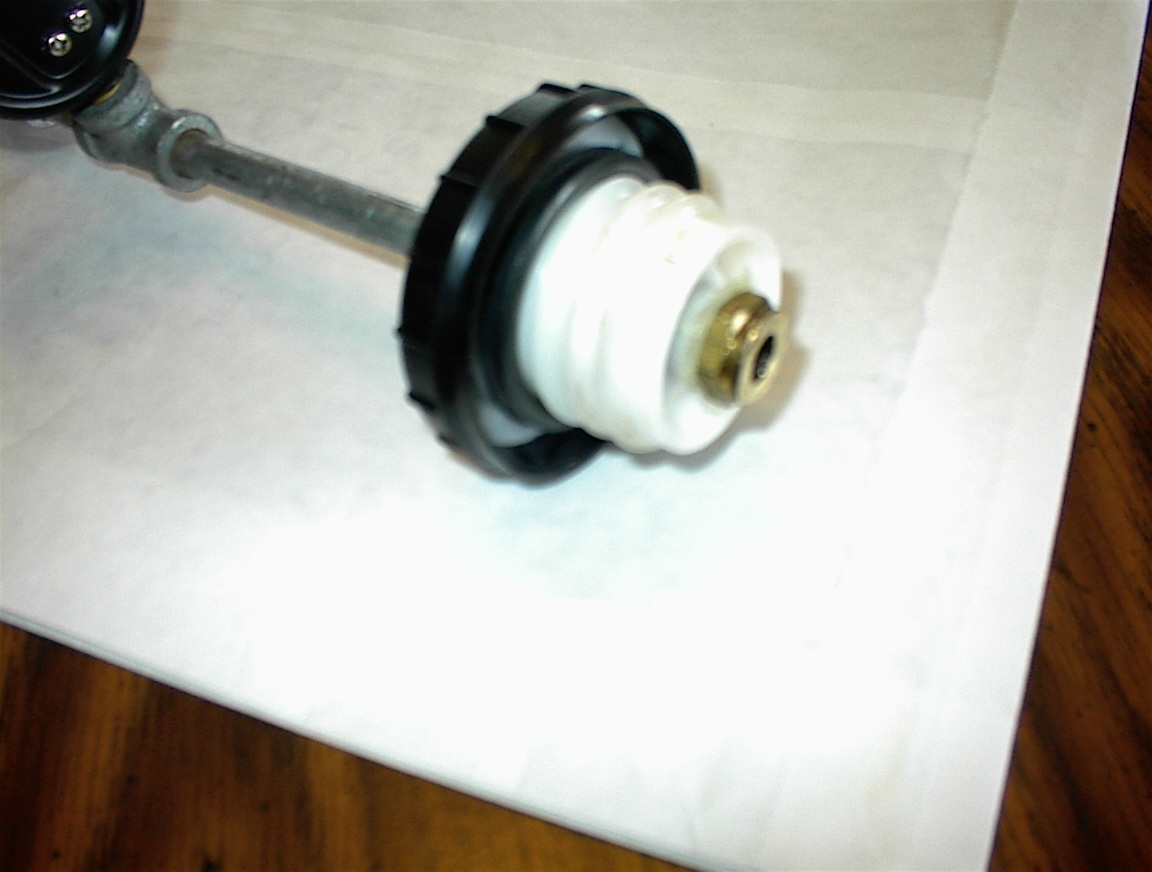 I made it out of parts I had in my shop, but you can buy the parts you need for less than $6.00, Ignore the pressure gauge on mine - I also use it on my farm tractor and it's there to remind me not to pressurize more than 15psi. Actually, all you need is the forward end, from the gauge forward. The cap is a STANT 11817, which you can get from any auto parts store. Drill a 3/8" diameter hole straight through the middle. Next, pick up a six-inch 1/4" NPT galvanized nipple from the hardware store and thread it through the hole, making sure it goes all the way through. On the end that comes out the bottom, use a 3/8-24 nut. It's not an exact fit, but close enough. Put a little hot glue or some sort of sealant under the nut and pull it back through the cap until it seals. The threads on the other end will fit most air guns. Once you have the pressurizer on the filler neck, and an air compressor and gun hooked to the pressurizer, gently put air in the tank until it "Pops" - more like a booming sound, actually. After several seconds, you will hear the same sound when the pressure bleeds off, so have whoever is helping you give it another gentle shot of air. And keep doing it until the engine starts. Meanwhile, back at the banjo fitting, once you start getting a steady spray of fuel from the fitting, close it. Not too tight. About 20 pounds of torque is about right. Also have plenty of rags handy to mop up the fuel. Next, turn on the ignition key, wait five seconds and "Bump" the starter. Leave the key in the RUN position for 30 seconds, then turn it off. Do this at least five times or more, but ten should be plenty. Then turn the key on and activate the starter until the engine starts. Go to about half throttle and keep it there until the engine runs smooth - about 5 to 10 seconds, then let it go to idle. You should not have a lot of smoke except during the first five seconds or so. And remember that the next time you drain water from the filter, have the engine running while you do it, and don't open the drain valve too far. If you have questions, contact me at budhimes@aol.com