Later this year we're going to be out for 2-3 months and it wasn't hard to convince the boss that we could do better...comfort wise. Our 39L had a sleeper couch, a free standing table and 4 heavy chairs, and the **&^ love seat. Carolyn was not willing to get rid of the hide-a-bed but after I convinced her I could build a cabinet/table with an electric rising TV where the loveseat was and we could get some decent recliners to put where the couch was and we could move the hide-a-bed to where the table and chairs was, she was a go. The table and chairs was the casualty. I picked up a pair of Euro recliners and some folding chairs from my cousin Jim. I made the cabinet in my shop. Originally, I was going to use Corian but found out that ours (Burnt Amber) is discontinued so we opted for an off white cabinet with similar white tile on the counter top and table. The table pulls out 15" but instead of facing each other and sticking out further into the room, We sit side by side and face the TV. LOTS of room. The cabinet has 8 drawers 22" deep and there is room for a large tote behind the electric fireplace (750 or 1500W). It is removable by removing a single latch and lifting it out of the way. I also ran two new power lines into the slide and also ran a coax and HDMI cables into the slide from the front overhead. Several significant challenges but mainly just work.

We really like it and believe it will greatly enhance our enjoyment of the coach. I still have some small things to do and I need to make a cabinet to go between the new chairs.

Below are some photos. Click the pictures to see a larger version (they will open in a new browser tab or window) 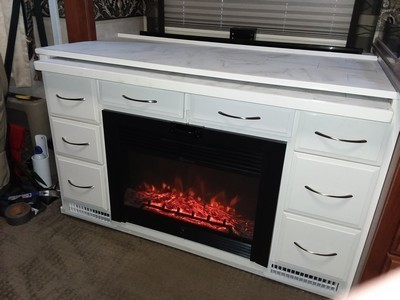 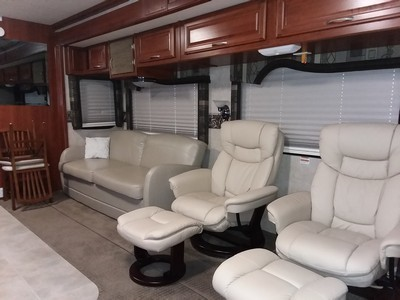 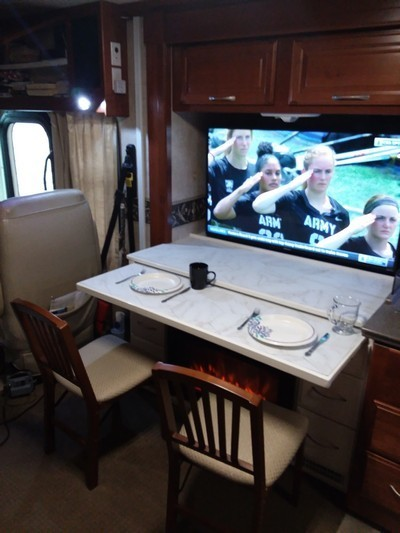 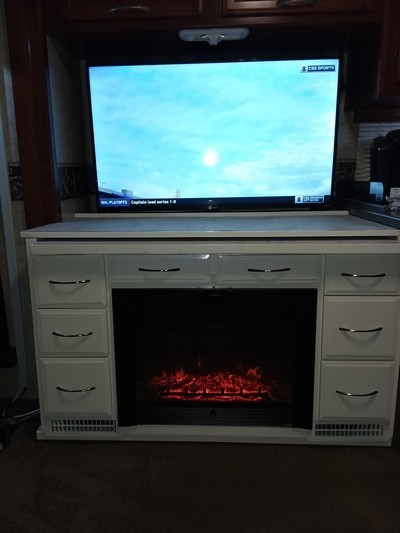 A couple comments. The cabinet is 26" tall, 32" deep and 51" wide. But the TV takes up the back 9". I was able to use 22" self closing drawer slides for the drawers so there is a lot of storage although I did lose some space because of the dead air around the drawers.

I looked at how the new coaches handle the table. Basically, they cantilever a glued up piece of plywood 1" thick to the cabinet. It sticks out about 10" in front of the cabinet and also has some steel outriggers that support it. The table slides on top of that and there are two pieces of "Z" shaped metal that wrap around the cantilevered piece. These "Z's" keep the movable table from binding or getting out of alignment. On the back of the movable table is a bearing surface, probably a piece of UHMW that rides against the bottom of the cabinet top. As weight is put on the table, the 'Zs' take some of the load and the cabinet top handles the rest. In order for the table to drop or bend, something serious has to move and it's just not going to happen...although I doubt it's designed for anyone to sit on it.

The problem is that because of the way the table sticks out, it restricts walk through space and is always there even if you don't need the table.

When I broached the idea of side by side seating with the boss, I mocked it up so we could sit at the table and make sure everything worked. I decided to put 4 of the 22" soft close drawer slides FLAT on a piece of 3/4 plywood that runs flat across the cabinet...side to side and front to back. It is very structural. The movable table is actually a piece of 48x24x1/2" aluminum honeycomb I have had for years. It is VERY rigid, strong, and weights next to nothing. It slides in and out 22" and is held in by the soft close slides. A sharp tug and the slides let it go and it pulls out easily. On the back of the table are some Delrin slides that are just a bit below the bottom of the cabinet top which is a piece of very high quality 16ply 3/4 plywood. When the table is pulled out and pressure is put on it, the Delrin presses against the bottom of the top. In order for the table to droop, the top surface has to bend. Ain't going to happen. In order to get the table top at the desired height, the new cabinet is 1 1/2" lower than the top surface of the kitchen counter. The retractable table top is 1" under that so that makes up for the height of the slide out box which is about 2 1/2" above the floor of the coach. It's simpler than it sounds and I'll attach some photos that may explain better than the words. I also ran the slides in due to some anticipated storms tonight and took a photo of how much room there is with everything in travel mode. Nothing is stowed properly but you can see that there is plenty of walk around room.

The first photo is the actual slide box floor construction. You can see the 1" thick aluminum structure and the 1/4" plywood on the top and bottom. If you look CLOSELY, you can see the edge of the aluminum sheet that is the bottom of the box itself. 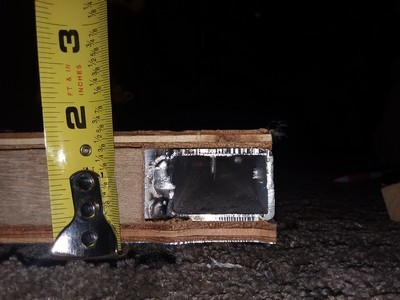 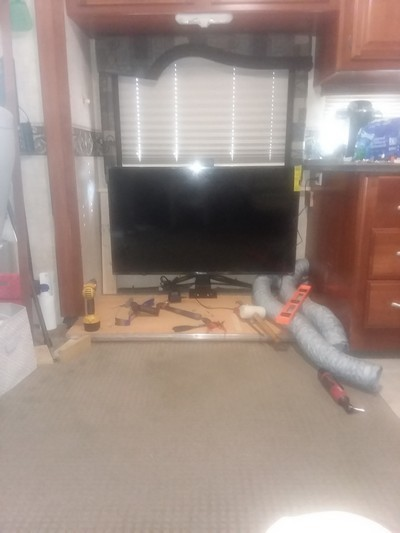 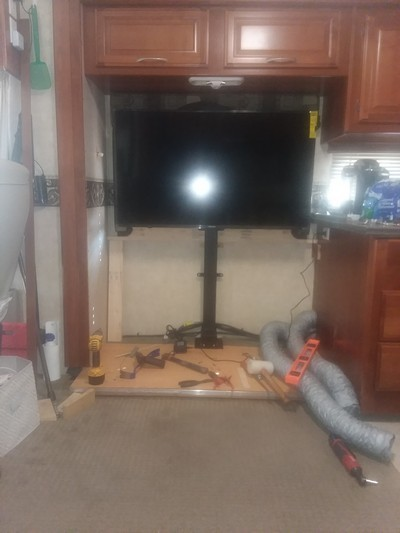 One comment on the TV lift. These things come in various sizes and prices. The good ones are multiple stage screw jacks and pretty expensive. I chose a cheap one ($200) from Walmart.com. It is very quiet, smooth, and strong. I tried to stall it and couldn't. The TV is a 50" and doesn't QUITE go down all the way below the cabinet top...this is due to the 2 1/2" we lost because of the slide out floor and to keep the table top from being too high for comfortable eating. However, we can still lower the TV and open the blinds if we want to look out of the window. The front TV still works so during the day, we could open the windows and move the chairs around so we could watch that if we wanted to. I spent a couple of days building my own lift out of some screw jacks I have laying around. It worked fine but was noisier than I wanted so I threw money at it. 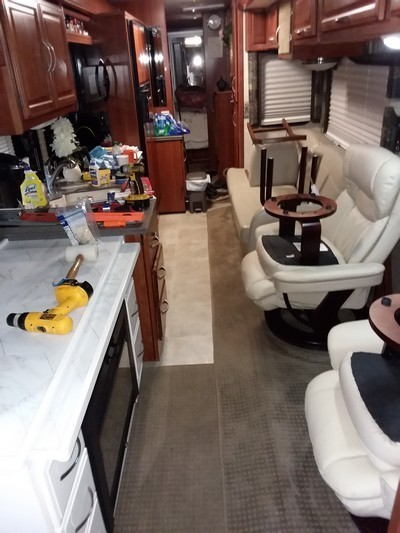 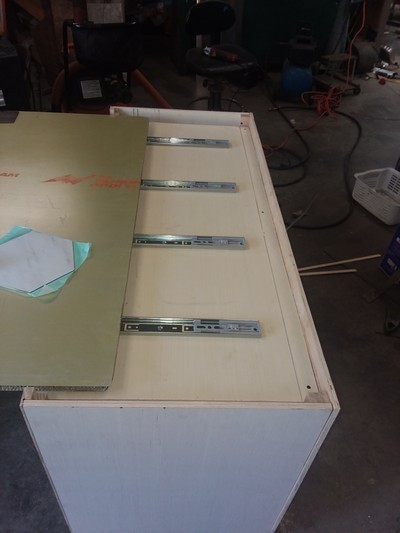 UPDATE:
Pretty well finished this project today. I built this cabinet to go behind the new chairs and to give us an 'end table'. LOTS of storage and the chairs still fully recline. On the 39L, there is a metal junction box and some DC wires that are exposed when the couch is moved. This covers that and captures some of the empty air.

This photo is with the footstools in travel mode: 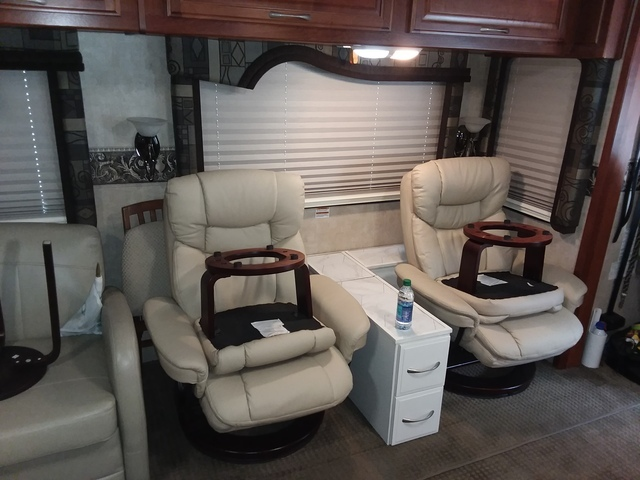 And this is in normal living mode. Note the fold up dining chair behind the left hand recliner. That probably won't stay there but that is where they will travel. 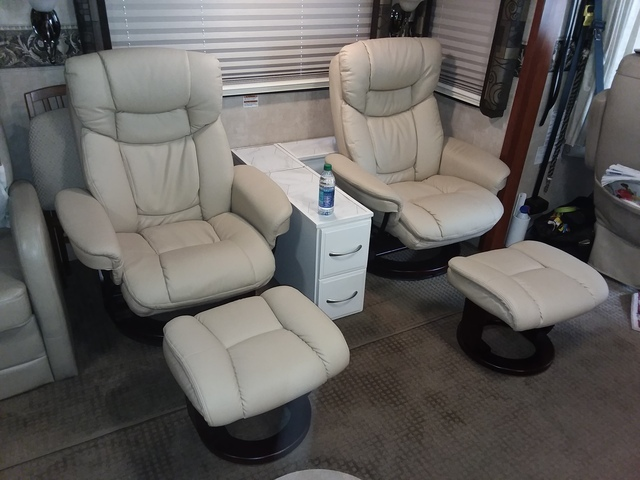 A total of 5 drawers. 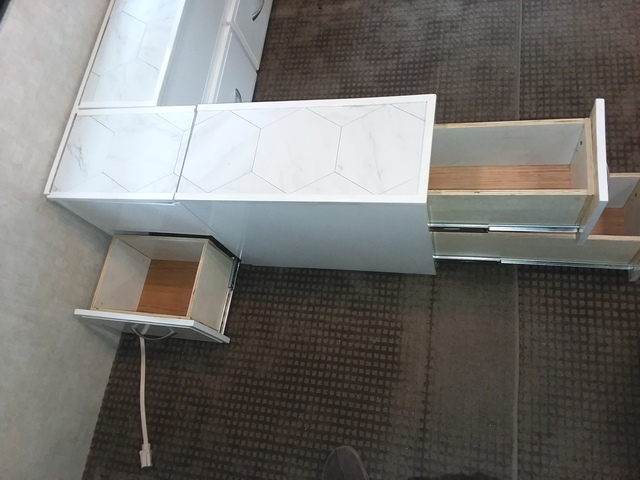 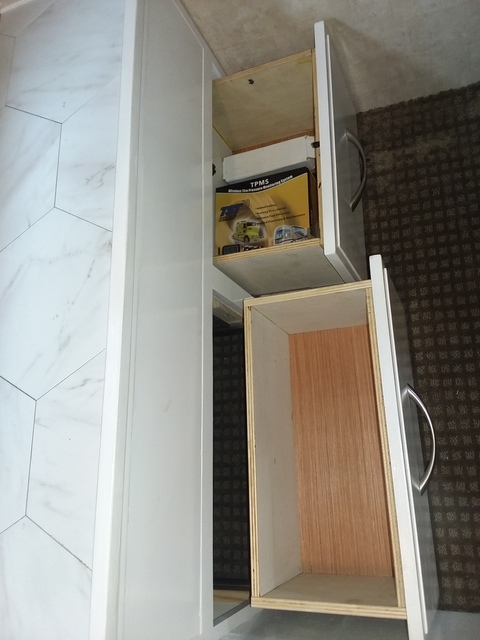 And two cabinets that open from the top. The smaller one has a inverter fed power source and is intended to be where we keep the multitude of chargers so the wires are out of the way. 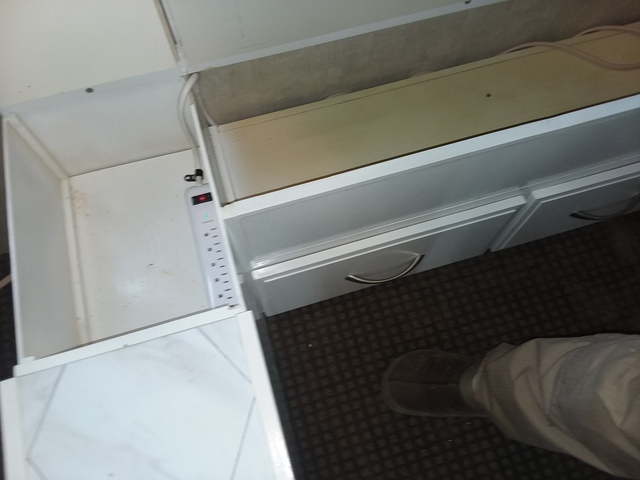 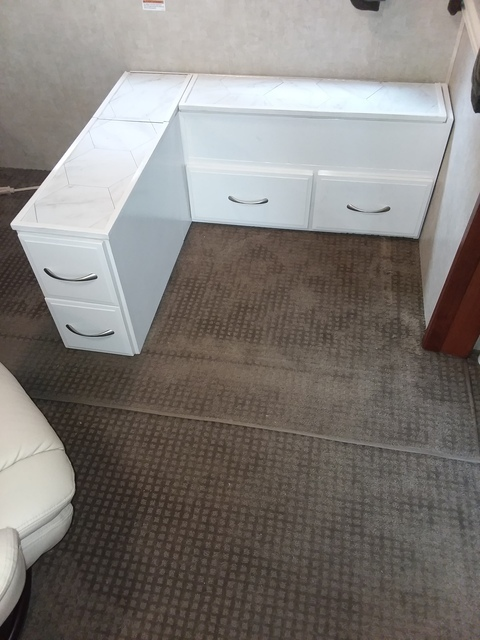 I told the boss that this is MY storage and she can have the storage in the TV cabinet. I have a Craftsman tool bag that lives beside my drivers seat that attracts clutter. All that 'stuff' and a good bit of my small tools and such will go in here.

I still have to put some wood blocks behind the fireplace to keep the big tote from sliding around. Other than that it's done!... At least this phase.

We just acquired a only used one time dishwasher from a 2019. I'll remove the gas stove top and oven and put in the dishwasher, an induction two burner cook top, and a nice drawer. I knew I ran that extra power line for a reason LOL! Carolyn has never taken to the gas appliances and the oven has never been lit by us or any of the previous owners.

Probably start on that phase in early June.