This little 4 hour project had some significant improvements and was pretty easy.

Someone posted a mod where you block off the forward facing duct that allows the rear unit to also send air to the front vents. The mod involves blocking off the duct and sending all the supply air to the rear vents. The problem with the standard configuration is that this duct blocks at least 1/2 of the return air opening. In addition, you can BARELY feel any air flow from the rear vents in the bedroom and bathroom.

This was a desirable goal so I decided to think on it a bit. What would really be great I thought, would be if there was a way to use a real air filter instead of these hinky pieces of foam or whatever. In order to do that, I'd need to change the way the air moves in the plenum.

These two photos show the factory configuration. The supply side is sealed at the bottom by a metal plate that is screwed into the housing. It has been removed in these photos. You can see the forward duct that obstructs the return air area. Those two little 4x4 spaces on either side of the duct is the ENTIRE return air. 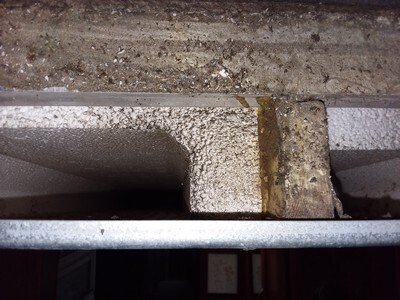 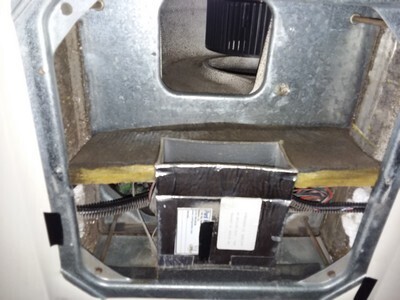 The first thing I did was remove the fiberboard dividing wall and the 6x3 rectangular forward duct. This opened up the entire unit. You can see the back of the controller at the top of the photo. 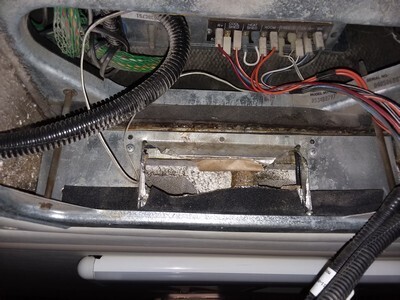 Then I flattened the flanges on the original housing, and taped in place a piece of aluminum to seal the forward ducts. Otherwise the front unit will blow air into the supply for the rear unit and waste a lot of good airflow. You could use most anything to seal up the ducts including just plugging it with some fiberboard from the original bulkhead. This doesn't show the metal tape I covered the patch with. Foil tape works good and lasts a long time. It was actually designed for putting together fiberboard duct about 50 years ago. 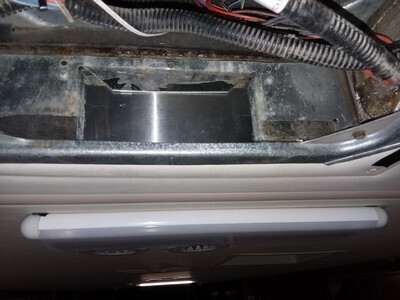 So now I need to separate the return side from the supply side. In the stock layout, the air is blown straight down by the squirrel cage fan and hits the plate at the bottom. This creates a huge amount of turbulence and back pressure on the fan. Air flows in the path of least resistance which should be into the ducts. However, 90 degree bends are absolutely the worst thing you can do to keep air moving. You'll NEVER see anything like this in a ducted residential or commercial system unless someone was totally clueless. The next time you are in a restaurant with exposed ducting, take a look at how they do the elbows. 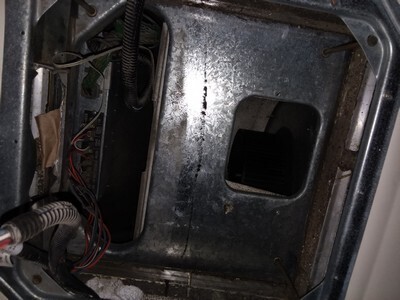 Ideally, air would be CURVED to go in the direction wanted. That meant I needed to make a curved 'bottom' for the duct instead of the original flat bottom and the separating wall. Well how about that, I have this piece of sheet steel that was the old bottom that looks to be the right size and already has some sound deadening material on it. It even has screw holes where it was screwed to the back side of the housing. Sure enough, after I bent it in about a 6" radius and beat a 1/2" flange over it fit pretty good. 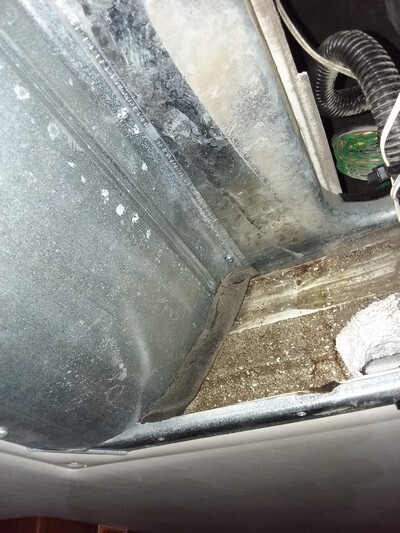 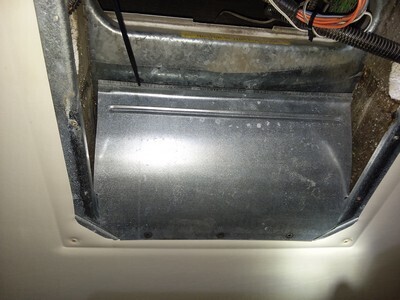 A little trimming with sheet metal shears so it would clear the sides, some of the original duct board to close up some minor gaps, and some metal foil tape and it's done. EASY! 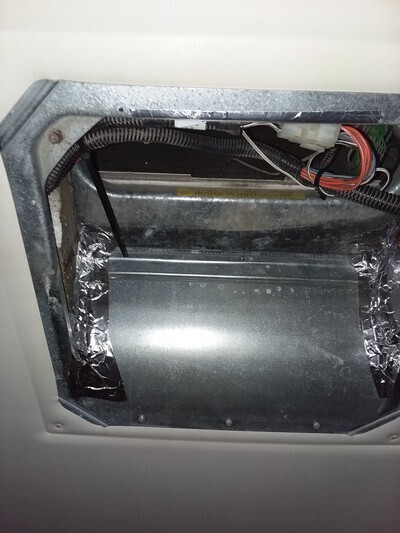 At this point I have a 14x14" opening all leading to the return air. I had previously purchased some 16x16 pleated filters. These have metal stiffners and do not need additional support to keep from being pulled upward. I cut some 1x1" strips and nailed and glued up a rectangle that was 16x16" INSIDE and outside was the same as the original inside plastic. 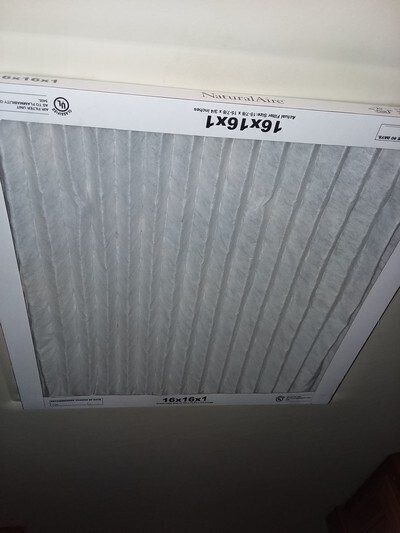 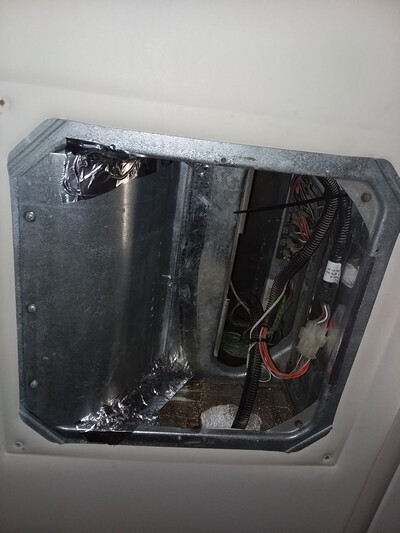 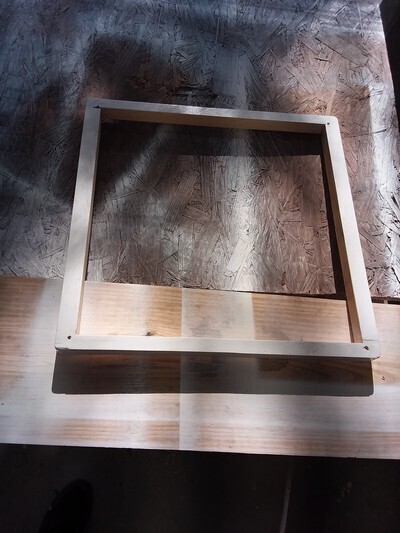 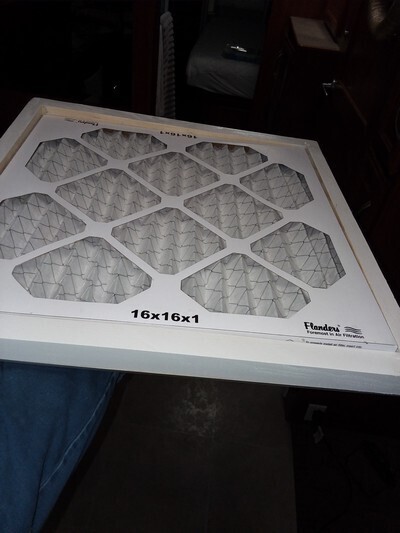 This photo shows the filter inside the new wooden frame. Then it was a simple matter of placing the plastic grill over the wood, drilling holes in each corner and mounting it in the original screw holes in the ceiling. Oh, I did paint the wood white. I'll probably get some white vinyl and cover the wood so it better matches the ceiling. 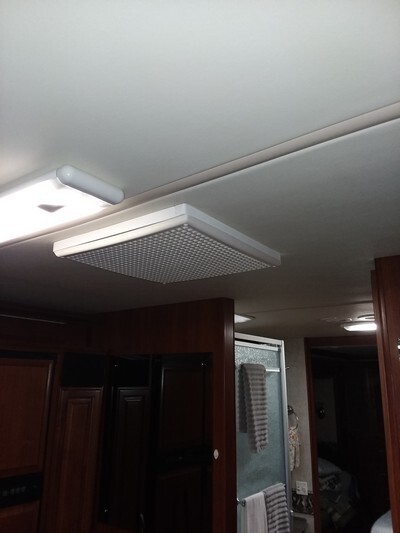 This little project got a 2 thumbs up from the boss.

A few months later after 4 weeks on the road, I was showing Bruce Plumb the ac mod at the Pueblo rally and pulled the filter out. I was VERY SHOCKED! The old foam things must have been just worthless because they rarely showed much dirt. The following photos are of the filters after about 40 days on the road. The larger filter is on the rear ac which runs pretty much continuously when we are plugged in. 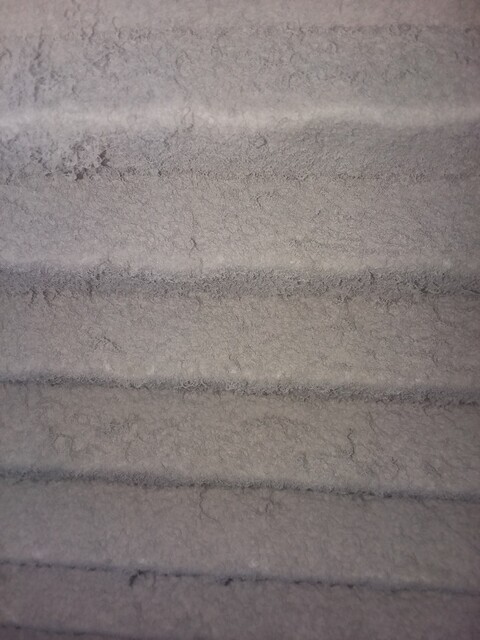