LED's are supposed to last "forever", so why do my LED door handle lights fail? the problem is with the design of the LED driver circuitry. LED's can easily last 10,000 hours if they are driven at their rated current which for white LED's is 25 milliamps (ma). The manufacturer of the D's lighted handles "control" the current by using a 150 ohm resistor. With a 3.6 volt drop across the LED and assuming a 13.6 volt battery voltage, this gives ((13.6-3.6)/150) = 66.7 millismps current to drive the LED - way above the recommended 25 ma. This gives a brighter light at the expense of a drastically reduced LED life.

We can greatly increase the life of the LED by adding a LM7805 voltage regulator which limits the voltage to 12 volts. By limiting the voltage to 12 volts and adding another 150 ohm resistor in series with the existing 150 ohm resistor, we have limited the current to ((12 - 3.6)volts/(150 + 150 ohms) = 28 milliamps. Therei s adequate room to fit the voltage regulator and resistor in the handle, but you will want to use electrical tape to wrap it up well to prevent shorts.

The downside is that the light is not as bright. If you want to keep the light as bright as it was originally, but still save money, you could just replace the LED for under $6 at Radio Shack. If you go this route, just carefully unsolder the burned-out LED from the circuit board and carefully solder in the new one - just be careful to observe the same polarity on the LED leads. Just use a small soldering iron as heat will destroy the LED. 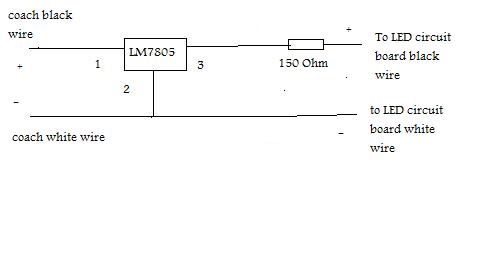