One evening, after returning home, we found our furnace and a/c completely inoperative. The green lights on the Electronic Climate Control (ECC) would not even light.

After some investigation and troubleshooting, the culprit was that water/moisture had invaded the ECC Module (located below the referigerator behind the access door). Here is a picture of the ECC Module: 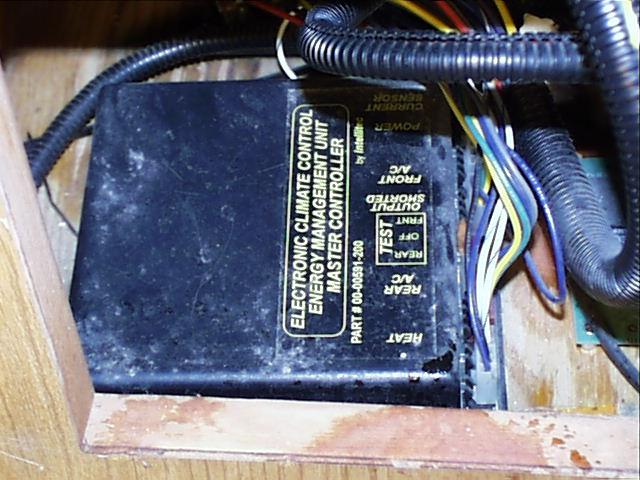 The ECC Module that was attached to the wood floor with two screws. Disconnecting the 5 in-line electrical connectors, the Module is able to completely removed for inspection. The bottom of the module snaps our easily which exposes the circuit board that can then be removed.

After careful cleaning of the circuit board and reassembly, everything works again. Although I did not have the proper tools, I was able to carefully removed all the oxidation between solder connections with a jeweler's screwdriver. Care must be taken not to scrape too hard as this will remove the coating on the circuit board.

Root Cause and Recommended Action

We had experienced very high winds and a heavy downpour that day - enough that there was water on the kitchen floor when we returned that evening. Since the ECC Module is fastened directly to the floor, it was literally sitting in water. Water is able to enter this area through the referigerator vent panel. However, it was also obvious that this was probably not the first time that moisture had attacked the ECC Module.

Since this area under the refrigerator is a high humidity area, it is also highly recommended that you either spray the ECC Module circuit board with an electrical deoxidizing spray and also place a vapor emitter corrosion inhibitor. Both of these items are available at Radio Shack, but they are special order and not stocked. The Vapor Corrosion Inhibitor, Radio Shack part # RSU 120422388 should be placed inside the ECC Module case. If your ECC Module PC board is already badly oxidized, you may want to clean and remove the oxidation such as Radio Shack part number 910-3879, which will also leave a thin organic layer to help prevent future oxiudation. Ideally, the ECC Module should be relocated to a location less vulnerable to humidity and water, but there does not appear to be sufficient wire slack to do this.