We got tired of not being able to reach the mirror control without moving our heads. So - we moved the control to the rear of the driver's side console. The wire harness is plenty long enough, it just needs to have the cable tie removed, the cable stretched out another 12 inches, and then retied. Watch out for the wires to the "Jacks down, don't drive" warning light, they will have to be pulled out of the wire bundle and run to where ever you want that warning light to be. We moved the mirror heater switch at the same time, and the "Jacks down, don't move warning light, and the little Fleetwood level back to where we could see it. We put a piece of cherry wood tape, with an iron-on adhesive back over the old holes. All these controls are now easier to use and see. (See the control placements on the 2000 Ds, they are similar). 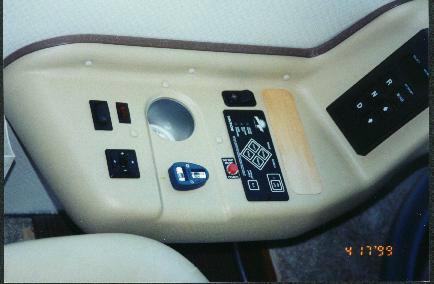 Then we got tired of having to reach forward to get to the transmission shifter panel. The panel is held onto the console by two u-brackets that clamp onto a steel frame around the panel cut out. The control cable is very long, and tied up with a cable clamp. The steel frame is just a half inch or so bigger than the hole in the console, and only 1/8" thick. So, we made a wooden box to fit between the transmission panel and the console, just big enough that the u-brackets could fit inside and clamp to the front face of the box. The box if made of ¼ " cherry plywood, stained and finished in clear Varathane, with a 1/8" plywood face. . Then we pulled the cable out of the shifter panel, and took the steel frame out. We drilled six holes in the steel frame, and used the holes as a template to drill holes in the console, and pilot holes in the back face of the box. We slipped the frame and the box over the cable and re-connected the cable again. Then we put the u-brackets back on to hold the shifter panel to the front of the box. Then we put wood screws through the frame and the console and into the box. With everything pre-drilled, everything lined up perfectly. We got the Allison drawings of the shifter panel, with all the measurements. I can fax them or post them if they are wanted. 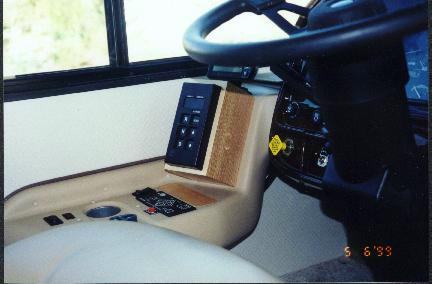