This webpage describes how to replace the 20" TV in your pre-2000 Discovery with a 27" TV. This is a relatively straightforward project and can be accomplished with a minimum of tools and skills.

Thanks to Bob Procell for this great project and also the accompanying pictures.

This project does not require the removal or modification of the storage compartments above the pilot or co-pilot seats. However, this limits your TV choices to those with a width of 25.5" or less. After some searching, Bob found that the RCA FD2744 27" TV fit the bill nicely.

The existing TV enclosure (box) is removed, reinforced, and lowered approx 2". The new TV will protrude approx 4.5" from the front of the box, necessitating that a base be made for the new TV from 3/4" plywood. The box is reinforced and reattached approx 2" lower, and the new TV is slid into place and secured.

The box that holds the TV is a three-sided box that is open at the top. The box is held in place by 10 screws - five on the left side and five on the right side. Remove these screws and then carefully remove the box by pushing/pulling down on the rear of the box.

Since the new TV is approx 20 lbs heavier, it is IMPORTANT that the box be reinforced. This can be done by using L joist hanger brackets on the bottom left and right sides.

Since the TV will extend forward from the box by approx 4.5", a new base must be made using 3/4" plywood. I used a 2' x 2" piece of 3/4" plywood for the base. First, measure and cut one end of this plywood so that it fits in the box, with the other end flush with the front. (You will have approx 8" of the original plywood sticking out the front of the box).

At this point, I will describe how Bob Procell completed his installation and another alternative will be discussed later.

With the new base positioned in the box, set position the new TV in the box. Approx 4.5" of the TV will stick out in front as it is too wide for the box. Using a pencil, scribe a line along the contour of the front base of the TV. Remove the base and cut along this line.

With the TV in the box, carefully measure how much taller the TV is than the top edge of the box (approx 2"). This is the distance that must be "lowered" when it is reattached to the coach. Remove the TV/base from the box and securely attach the box to the coach ensuring you have the approx 2" drop from the ceiling. Ensure that your screws are attached to solid wood on the frame of the compartments - not just screwed to the flimsy panelling that is the sides of the compartments. You can want to add extra screws, just to make sure the box is securely attached. Also, I recommend that you add a strap at the rear of the box that is secured to the wood header above the windshield.

After the box is securely attached, you can slide the new TV/base into the box. Check for proper positioning so that the left and right compartment doors can open freely. Secure the base to the box with the flat extender.

At this point, you are basically done, but you are left with an unfinished front and bottom at the TV set. Bob crafted a really beautiful shelf that attaches to the front of the TV/base.

Not possessing the wood-working talents that Bob has, I took a slightly different approach. Also, I did not want to attach my TV to the base. My base is permanently attached to the box, and the TV rests freely on the base. This necessitated other means of securing the TV. My TV is kept stationary by a lip on the front of the base. When I cut my base, after I positioned the TV on the base, I carefully slid it foward approx 1" and scribed a line along the front base of the TV. I then carefully moved the TV foward another inch and scribed another line. Cutting along these lines gave me a nice curved base that protuded 1" from the front of the TV and also a 1" piece that I screwed to the front of the base, thereby creating the "lip" that holds the TV in place. However, the TV will tend to tip forward, even though it fits snugly against the ceiling. Being a "belts and suspenders" person, I solved this by adding two cable loop connectors (Radio Shack) that screw into the top rear of the TV frame (existing screws that attach the cabinet) and then using wire to attach to the rear box support. Also, after the TV was in place, I attached two small thread spools to the ceiling, positioning them so that they tightly rested against the face of the TV about 3" from each end. These were painted black so that they are virtually unnoticeable.

The new TV makes a world of difference. Not only is the picture much bigger, but the sound is also much improved from the Panasonic. My only "regrets" is that the RCA lacks some features. There are no A/V jacks in the rear (front only) and there are no super VHS or component video input jacks. However, these are limitations that I can easily live with. If you decide on another TV, remember that the width is the most critical dimension as major cabinet modifications will be required if you use a TV wider than about 25.5".

Thanks to Bob Procell for this great modification and also for his help with making the modification in my 98 D. 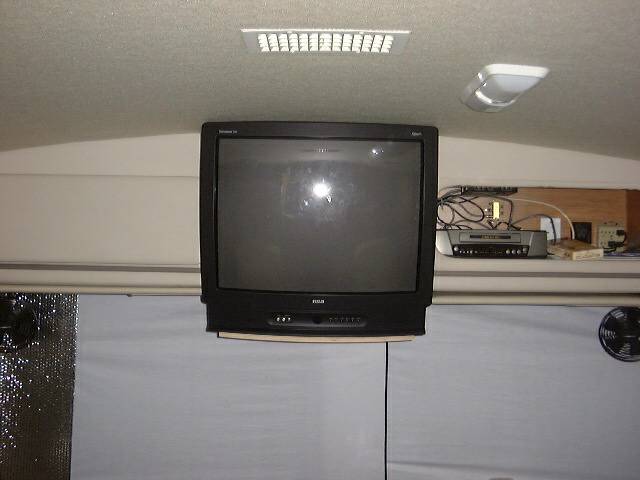 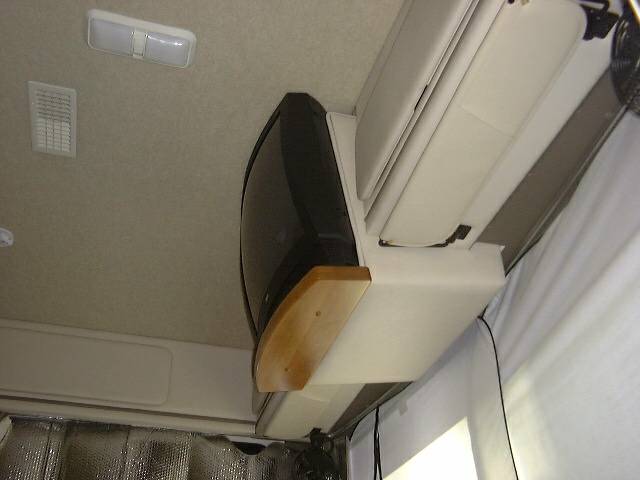 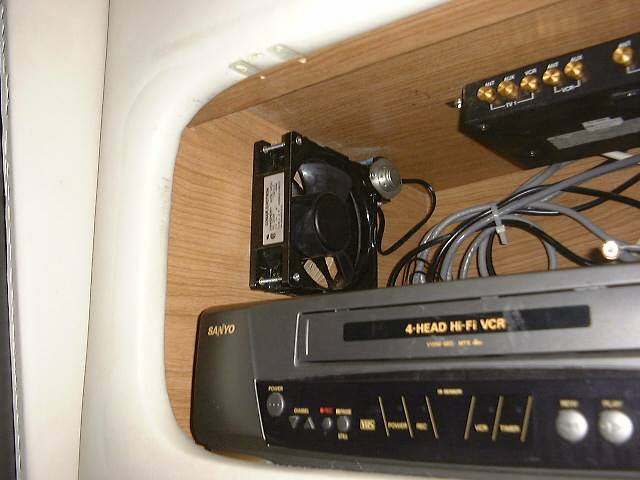 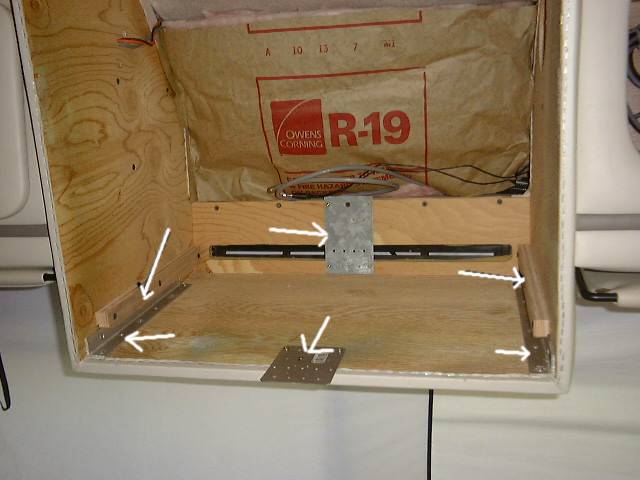 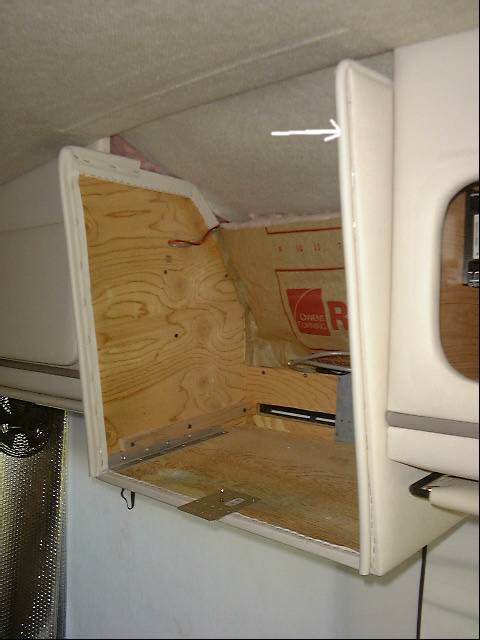 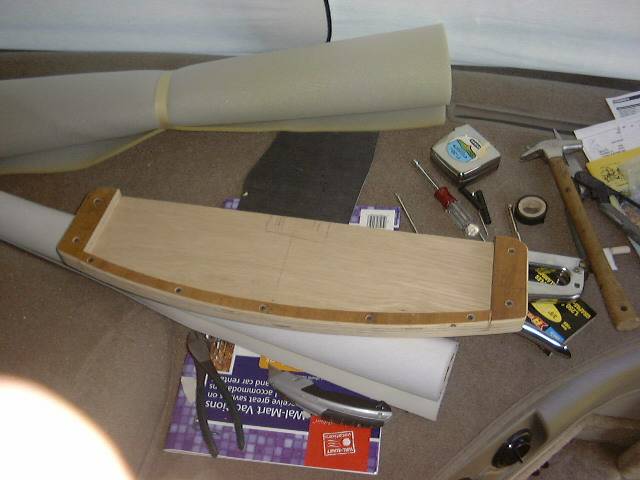